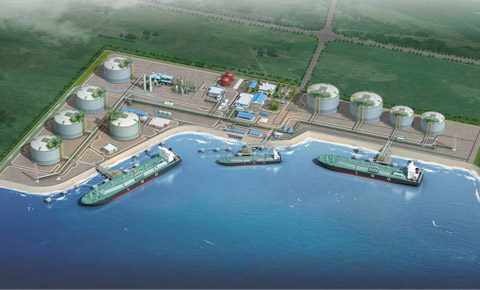 The Secondary Berth Project is situated on an approximately 10 hectares of reclaimed land adjacent to the LNG Terminal site and forms part of the S$1.7 billion overall Singapore LNG Terminal project cost. The secondary berth is designed to allow for future installation of loading arms and associated piping for the unloading of refrigerated Liquefied Petroleum Gas LPGc vessel with cargo capacity range of 60,000 to 80,000 cubic meters.

The Secondary Berth comprises of :

(a) A Secondary Jetty that capable of berthing LNGc and LPGc Vessel with a cargo capacity ranging from 60,000 to 265,000 cubic meters (m3). This jetty consist of a jetty head sized 58.75m width and 30.85m length together with 6 nos of mooring dolphins, 3 breasting dolphins and 1 embedded breasting dolphin. The jetty is founded on 104 nos of 914.4mm and 1420mm diameter steel tubular piles, of which most of the piles were socketed into rocks. All 4 breasting dolphins are installed with SCK2500 cell fenders. Total 4 nos of 16 inches LNG loading arm and 2 nos of spare loading arm for LPG will be installed at the jetty platform tofacilitate incoming LNGc and LPGc vessels.

(b) A Tertiary Jetty marine sub-structure designed for the future berthing of smaller LNG ships and barges with cargo capacity ranging from 10,000 to 40,000 m3. This jetty consist of a jetty head sized 78.6m width and 37.50 m length together with 2nos of mooring dolphins and two mooring points and 2 nos of breasting dolphins.

These two jetties are new additions to the Primary Jetty (cargo capacity of 120,000 to 265,000 m3) which is also being awarded the Engineering, Procurement and Construction (EPC) contract to Antara Koh Private Limited by Main Contractor Samsung C&T Corporation in November 2011.