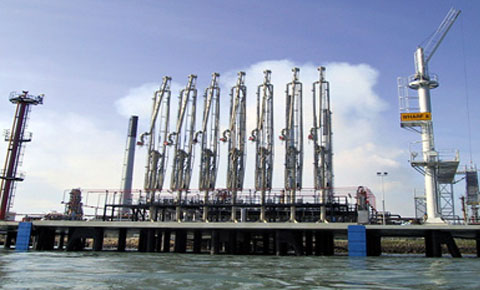 The works consist of the demolition of existing approach-way, dredging of seabed to – 17.3m PBCD and supply & installation of 145 nos. of steel pipe piles. As this new wharf 8 was built at the same location of the old wharf, all the pile positions were designed to avoid the existing old piles. The wharf 8’s main deck (55m x 30m) was constructed with 6nos. of pre-cast slabs, each weighing more than 220ton. 2,000m³ of reinforced concrete was used to cast the main deck and dolphins. 2 nos. of the existing dolphins were modified and strengthened and 3 additional dolphins were added to accommodate the larger ships berthing at the new wharf. The equipment on the deck includes 7 nos. of loading arms, a fire monitor, gangway, bollards, marine fenders and piping manifold. Steel walkways were used to link all the dolphins and quick release hook was installed at each dolphin. The scope also includes piping, fire fighting, mechanical, electrical and instrumentation works.

Black and white oil piping links the existing pipes on the land-side to the new wharf 8. The steel platform on the deck allows the operator easy access to the MOV and loading arms. The oil catchment was constructed to collect any oil spillage back into the oil sump and fiber mat coating was applied to the concrete surface to protect it from corrosion.