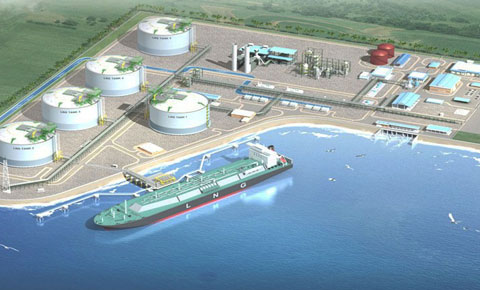 Singapore’s first LNG terminal is the first open-access, multi-user LNG terminal in Asia that is capable of importing and re-exporting LNG from multiple suppliers. It is situated on a 30 hectare plot at the Meranti Seafront on Jurong Island. The terminal will not only provide capacity for Singapore to import regasified LNG for its own needs, but also serves as a catalyst for companies to open up trade opportunities. To be built at an estimated cost of S$1.5 billion and is expected to complete in 2013.

Antara Koh Pte Ltd was awarded in April 2010 as the Engineering, Procurement and Construction (EPC) Contractor by Main Contractor Samsung C & T Corporation for the EPC of the Jetty in this landmark project.

The project consists of the construction of a jetty head sized 43m length and 35 m width, installed with 4 nos of 16” loading arms, together with 6 mooring dolphins and 4 breasting dolphins. The jetty is constructed to berth a minimum LNG carrier vessel size of 120,000m3 to maximum vessel size of 265,000m3. The jetty head was designed in flat slab concept so it can bear the same unit load at any location on top of the jetty head.

The jetty is founded on 94 nos of 914.4mm diameter steel tubular piles, many of which were socketed into rocks. All 4 breasting dolphins are installed with SCK2500 cell fenders.