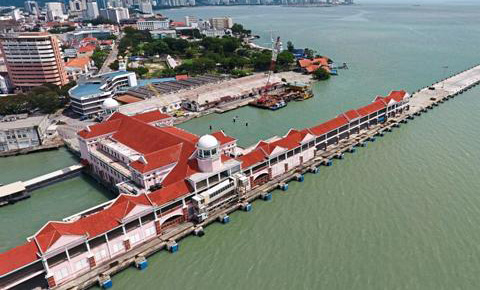 Antara Koh was proud to be awarded as the main contractor for the marine civil works of the redevelopment of Swettenham Pier Cruise Terminal (SPCT). The project was a high-profile joint venture between Penang Port Sdn Bhd and Royal Caribbean Cruise Ltd (RCCL) to boost the handling capacity of SPCT to 12,000 passengers at any given time, thereby re-establishing Penang as the terminal of choice for international cruise operators.

The new berthing platform was seamlessly integrated as a continuation to the existing jetty. The superstructure of the old breasting and mooring dolphins were carefully removed by controlled demolition using wire saw diamond cutting while their piles were incorporated as part of the new substructure. The pile foundation consists a combination of 1000mm dia. prestressed concrete piles and steel pipe piles. Two piling barges were deployed to expedite the pile driving works and doubled as heavy lifting machines for the demolition works.

The top deck structure comprised mainly of modular precast shell members and precast planks which were stitched together by in-situ concrete finishing. Steel walkways of 23m to 30m lengths were installed to connect the new breasting and mooring dolphins with the jetty head. The mooring system installed include a total 42 nos. of closed cell fenders and 48 nos. of bollards that lined the fronts of the outer and inner berths. Cathodic protection was provided for the steel pipe piles, and 2 nos. of high mast tower lights were installed on the deck.

Despite the Covid-19 hiatus, the project was completed in 12 months.