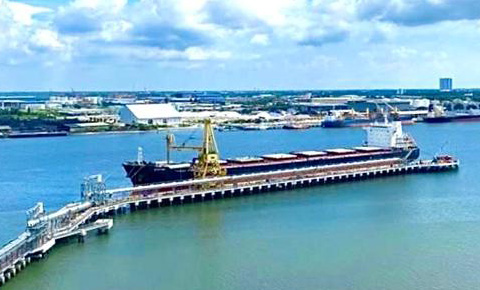 Malayan Flour Mills Bhd. (MFM) in Malaysia, planned to extend its existing jetty at Lumut in the year 2018 for its growing wheat and livestock feeds importing business. The existing berth was a piled trestle type jetty designed in the 1960s where the berthing operation was restricted by tide cycles due to shallower depth towards the shoreline, and can only cater for partly laden vessels around 8m draft.

Antara Koh was awarded the Design and Build contract to construct a 272m length new jetty head parallel to the river channel that would allow berthing operation of fully laden bulk carriers ranging from 6,900DWT to 84,000DWT (Kamsamax) with 13m draft, under all tide conditions. A 71m length new approach trestle was built to bridge the new and existing jetty.

Both the new jetty head and approach trestle comprise of a uniform 15m width concrete deck on which the ship unloader rails, truck carriageway and conveyor belt structure run. A widened deck at the end was provided as the turning platform for trucks. The entire top deck was supported by multi-raked, 800mm dia. concrete spun piles up to 62m length. A fleet of tug boats and material barges were deployed to take delivery of these piles from pile supplier’s port and ship to the project site. These piles were then driven by our 80m height fixed tower piling barge PB88.

In order not to disrupt the existing jetty’s active operation, all construction works were carried out by marine equipment. The superstructure was designed in highly modularized precast components, manufactured off-site and transported to the project site by barges. These precast components were then installed by a 180t crane barge to assemble the frame of the deck structure and interconnected by in-situ concrete finishes.

A major deck feature was a pair of ship unloader rails that require high construction accuracy of ±3mm in sideways and top level along their entire 210m length. 18nos of closed cell fenders and equal number of 100t and 80t bollards were installed as the berthing and mooring facilities. Other features constructed or installed include conveyor belt supports, cable trench, cable slots, handrails, access ladders and navigation lights.

The whole project was carried out alongside the client’s active food-producing plant which upheld stringent requirements on hygiene, safety and environment protection.