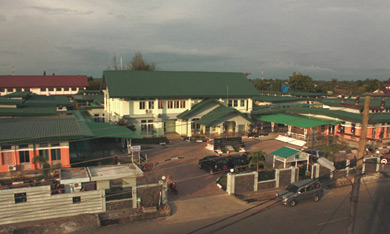 On 26 December 2004, an earthquake of 9.1 on the Richter scale triggered a giant tsunami in the Indian Ocean. Meulaboh, located at the coast of West Aceh of Indonesia, was one of the areas hit hardest by the tsunami. Approximately 230,000 people were killed by the earthquake and tsunami in Aceh, and about 500,000 were left homeless. Singapore was the first country to send their volunteers to help in tsunami-ravaged Meulaboh, Aceh. The main hospital in Meulaboh, The Cut Nyak Dien General Hospital, played an important role to tend for the injured during these demanding circumstances. The Hospital was partly damaged and in dire need of repairs and upgrading.

In July 2007, Antara Koh (I) Pte Ltd was awarded the contract by Singapore Red Cross Society to be the Main Contractor to rebuild and upgrade 17 buildings of the Cut Nyak Dien Meulaboh General Hospital. The upgraded capacity of the Hospital is 146 beds and 2 operating rooms. These new buildings of Cut Nyak Dhien Meulaboh General Hospital were constructed using concrete structure and light weight metal roof.

The scope of works involved 3 phases, phase by phase demolition of 25 existing structures (4,721m2) and rebuild of 17 new Buildings (7,513m2) complete with infrastructures and all Mechanical and Electrical Works such as Mechanical Sewage Treatment Plant, etc. and Ancillary Works such as Covered and Uncovered Walkway connecting buildings, Service Road, Parking Area and Landscaping Works.